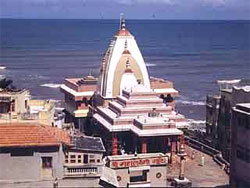 This is one of the old and famous temple in Mumbai. The temple stands in the north of Malabar Hill, near Worli sea-shore. Three idols of goddesses namely Mahalaxmi Mahakali and Mahasaraswati are installed in this temple. Devotees throng here on Tuesdays, Fridays and also during Navratri Festival.

According to the old records the original temple of Mahalaxmi was as old as that of Walukeshwar. But the temple was demolished and destroyed by the Muslim envaders in medieval period.

According to a legend the alive deities disappeared into the sea at the time of invasion and were found by an engineer after a long search in the sea at Worli. The knowledgeable sources say that the engineer from the Prabhu Community, who was incharge of the linkage work between Malabar hill and Worli, undertaken during the tenure of William Hombey, was very much disappointed due to his failure in the work he undertook. The work of constructing rampart was not coming up in any case. It used to slide down again and again. One day, as he was worried about his failure, he had a vision of the three goddesses in a dream. The goddesses asked him to pick up their idols lying at the sea bottom at Worli and build a temple for them. They also graced him for his success in the construction work. The engineer accordingly made a search for these idols and found them at Worli sea. He brought them ouitand installed them for the time being at a place where the temple at present is located. Built a spacious temple for the salvaged idols. The temple stands at the place for more than 100 years with a glorious past and mystic legendary. 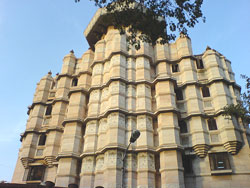 The original old temple was built about 200 years ago. Since the old precinct of the temple could not accommodate the large number of devotees coming for darshan in crowds, the trustees of the temple renovated the temple in recent years. The present design of the temple is truely a beautiful piece of architectural skill.

The temple situated at Prabhadevi, at a short distance from Dadar, is a popular place of worship in Mumbai.

One of the oldest Jain Mandir in Mumbai stands on the Ridge Road in the Malabar Hill area. The temple was built in 1904 with marble stone and beautiful carving on its exterior part. Figures of various animals and birds, artistically carved in the marble stones, are displayed on the front part of this temple. It is one of the important temple and old place where the jain devotees go for daily worship. 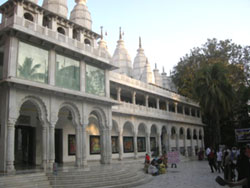 It is an international Society, founded by Acharya Swami Prabhupad with a sole mission of spreading the life and philosophy of Lord Krishna all over the world. The Society has acquired a land at Juhu area where a Krishna Temple has built for the Krishna conscious devotees. Important events from the life of Krishna also have been displayed on the interior walls of the assembly hall in the temple. The temple has its Ashram, an auditorium for discourses and other amenities where daily activities are run according to the schedule. The Society celebrates the Janmashtami Festival every year in a big way.

This spectacular shrine of a Muslim Saint Hajji Ali is built in the midsea at Worli, very close by the Mahalaxmi Temple. The memorial is considered to be a sacred place in Mumbai. Its snow white colour and beautiful architectural design can be seen distinctly as a landmark even from a far off distance. People of all faiths and sects go to this shine for blessings.