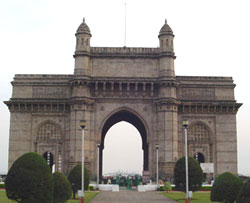 It is one of the best pieces of architect British have left behind them in Mumbai. The monument was built to commemorate visit of King George V and Queen Marry to India in 1911. This grand, magnificent, attractive and most beautiful land mark stands regally at Apollo Bunder.

The monument was planned and designed by the veteran architect George Wittel. It is built of local yellow sand stone, popularly known as Malad Stone. The construction was completed in 1924.

The monument is built in Indo-Islamic style derived from a Gujrathi style of architect. The height of the central dome of the structure is 83 feet and its diameter is 48 feet in width. Because of its unique location, it can be prominently seen, both from the land and from a far distance in the Arabic sea. Motor launches are readily available here for a mini sea voyage in the surrounding sea water. Tourist can enjoy a short sea ride and see the light house and have a close view of the anchored ships.

After the dusk the sight of the Gateway of India from the sea water is breathtaking as the monument is illuminated in the evening with glowing flood lights. In recent years, after the independence, tall and a magnificent statue of Chhatrapati Shivaji has been installed in the premises. There is an another statue of swami Vivekanand in the vicinity of this land mark.

Not far from this place, are the world famous Elephanta Caves at a distance of 10kms. in the sea. Nearest Rly. Station: Churchagte, C.S.T. (V.T)

It is a beautiful and elegant foreshore road constructed along the western seafront. This world famous Marine Drive, popularly known as 'Queen's Necklace', was completed in 1940. This road starts from Nariman Point and passes along the seafront with a majestic semicircular curve to reach at the foot of Malabar Hill. Number of residential buildings and bungalows, with uniform height and design, painted in white and off-white colors, lined up along the other side of the road gives a very exceedingly charming look at this road.

However, at night the entire scenery changes. The road gets illuminated because of the flooding of street lights. The penetrating beam lights of speeding vehicles cut down the surrounding darkness like a powerful torch and pour showers of light on the entire area. It seems, as if a melted gold in a furnace is poured down on the earth to flow down in a stream. in the season of monsoon the sight of the illuminated road in the night looks like a golden necklace. Nearest Rly. Station: Churchgate (V.T) 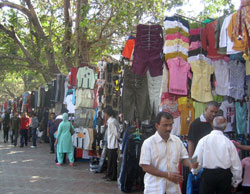 The open street market spread over the long footpath along the Cross Maidan, opposite the Bombay Gymkhana, has become a very popular market place in the recent years. This open market place has been created for hawkers who sold readymade garments from at very low price. Along with garments many other articles such as leather goods, antiques, electronic goods, scents, hosiery, purses and dress material. are sold here at cheaper rates. Nearest Rly. Station: Churchgate (W.R.), C.S.T. (V.T.)

This old famous market place was specially designed and built by Arthur Crawford, the first municipal commissioner of Bombay. The market was built for general public as a civic amenity. The market place, spread over an area of 72,000 square yards, was designed by an eminent architect. William Emersion and was completed during the tenure of Arthur Crawford.

The market is situated next to V.T. complex and adjacent to the J.J.School of Art. The office of the Commissioner of Police of Mumbai is opposite the market place. The market is a busy and crowded place almost all hours of the day. Nearest Rly. Station: C.S.T. (V.T.), Marine Lines 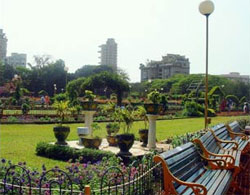 These two parks are situated at the top of the Malabar Hill and are visited almost all who pay visit to Mumbai. It was the British Governor Elphinstone, who first of all built a palatial bungalow for his own use on the Malabar Hill The area afterwards went series of development during the last century.

According to the old records the area of Malabar Hill was sparsely populated till the seven islands of Mumbai were joined together by the British. People visited the old Walukeshwar Temple, built by the Shilahara kings sometime in 8th or 9th century. It has been mentioned in the old records that prominent personalities like Chhatrapati Shivaji , Kanhoji Anger and Raghunathrao Peshwa visited Walkeshwar few times to perform religious rites at Banganga. The areas, otherwise, was in seclusion.

The construction of The Hanging Garden on Malabar Hill was a part of their efforts to augment the water supply to the city. The Hanging Garden is a water supply scheme implemented in 1880 with a beautiful garden at the top and three underground water tanks below it. The water supply scheme has a storage capacity of quite a large quantity of water for ready supply. The garden, was once again renovated in 1921. The birds eye view of the Marine Drive and the vast expanse of the Arabian sea from here is thrilling and spectacular. One can have a picturesque view of Mumbai vastly expanded in the south up to Cuffe Parade.

Adjoining the Hanging Garden is the Kamala Nehru Park. The park, covering an area of about 4000 sq. meters, was developed in 1952. Nearest Rly. Station: Grant Road (W.R.)